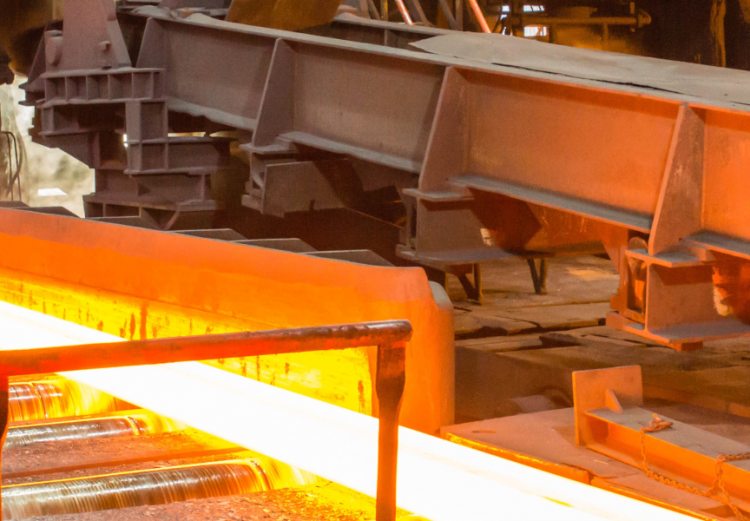 The East Chicago, Ill., plant of the former Inland Steel Co. (now Ispat Inland) was considering changing the type of rolling mill lubricant used on a temper mill. Mill lubricants are critical to a variety of product and process characteristics in rolled product since they transmit the force of the mill rolls to the surface of the material being rolled, in this case varieties of steels. Rolling lubricants can affect mill reduction efficiencies and speeds, as well as the surface quality and roughness and metal fine generation.  This article shows how an analysis was done to select the new lubricant that saved over $70 million dollars.

Inland had been using a fatty ester-based lubricant for years, but since the fatty esters were themselves harvested from animal fats, there was little ability to control a number of critical lubricant parameters. It was thought that moving to a synthetic lubricant would allow for lower variability in these parameters, as well as increase productivity, surface quality and steel cleanliness.

Four vendors were vying for this business and were willing to supply their lubricants for production trials. These production trials required fully replacing the lubricant on the mill and the remaining processing steps, so the sample size was limited. There were also two different types of annealing furnaces in use, a mixed hydrogen and nitrogen gas atmosphere, called HNx, and newer pure hydrogen atmosphere furnaces, called H2. Previous work during the start-up of the new hydrogen furnaces indicated that a lubricant might very well respond differently to the two types of furnace atmospheres. While the new furnaces had huge improvements in productivity, they had also been shown to result in a dirtier surface, as measured by the total residual carbon and top and bottom iron residuals after annealing. At this point, process tuning had improved the cleanliness of the H2 annealed steel, but it still was dirtier than comparable HNx annealed steel.

A critical requirement of the lubricant to be chosen was sheet cleanliness at the end of the process as defined by total carbon and top and bottom surface iron residuals. Surface cleanliness affected a number of product performance issues for Inland's customers.

Procurement had agreed to the test, anticipating that they would only need to show that all of the vendors were capable of making the cleanliness requirements and that they would then choose the least expensive alternative.

Based on these issues, the research questions for this portion of the study were:

There were four potential vendors to be studied and compared to the original fatty ester and to each other. For each furnace type, there were two furnace practices tested. Additionally, one of the vendors changed its formulation in the middle of the study to try to improve its ratings. Cleanliness ratings were gathered for all the test coils, in addition to other process and product data not discussed here.

Two approaches were used to analyze the data. The first research question was answered using a carefully designed experiment, which was analyzed using a statistical technique called Analysis of Variance (ANOVA). The ANOVA determines if there was a statistically significant difference in the average total carbon and top and bottom iron across the new formulations as compared to the old formulation. The ANOVA gave us the ability to control for known differences in cleanliness averages for different annealing practices and furnace atmospheres, so that any difference due to the lubricants would be isolated for identification.

Effect on Cleanliness The ANOVA showed that the average cleanliness was not greatly affected by using the new oils for HNx anneal furnace coils (though Vendor 2 was slightly cleaner on average). However, most of the new lubricants did significantly improve the cleanliness of the steel that was annealed in the H2 anneal furnaces over the baseline fatty esters. The exceptions were both formulations from Vendor 4, which interacted with the H2 anneal furnace atmosphere and resulted in a higher average total surface carbon as compared to the other new lubricants, including the baseline. 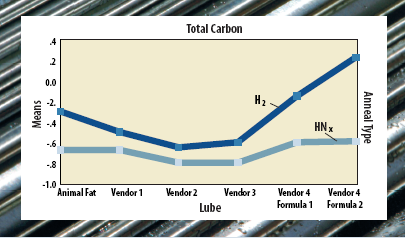 Figure 1 is a graph of the average total carbon for the two different furnace types of lubricant source. The actual numbers have been recorded on the graph, and lower numbers mean cleaner steel. The statistical analysis showed the average total carbon for the HNx anneal type is the same for all lubricants (the difference in the averages could be due to sampling error, = 0.10), and that the H2 furnace type was on average dirtier. Vendors 1, 2, and 3 were all statistically better on average than the baseline animal fat with the H2 furnaces, and both of Vendor 4's formulations were even dirtier than the baseline. This general pattern was found with the surface iron as well.

The ANOVA only analyzes if the means are different across the different anneal types and lubricants. It does not imply much about the capability to meet a specification since most customers do not care if your average is within the specification as much as they want the specific material they receive to be in specification. To answer the second research question, we calculated "capability indices" which account for both average and variability of the individual cleanliness measurements. (For a good discussion of the "traditional" capability indices, please refer to Luftig and Petrovich, 1997, and for the process performance capability indices, Petrovich, 1998.)

For capability calculations, the cleanliness target is zero. The assumption of one type of capability measure (Cpm and Ppm) is that any deviation from the target accumulates cost, so the minimum cost is at perfect cleanliness.

To be able to assess the ability of a process to produce product in the future, you must have reasonable process stability and an understanding of the total variation. The small sample sizes in each combination of factors does not allow you to assess control. However, you can assess the potential capability based on the data accumulated. Potential capability merely tells you where the cleanliness ended up and does not predict where it will go in the future. If the potential capability indicates that the lubricant is not capable, it is probably a good bet that it will continue to fail with time. Conversely, if a lubricant has a good capability to meet the specification, unless something changes from where it was during the study, you will likely see similar but slightly lower performance as time goes by.

The ability for a process to meet the specifications is commonly measured in three ways:

If your capability index equals 1 and you are on target, then you would theoretically make 99.73% of your product within the specification over time. Usually in industry you want a little insurance against falling out of specification if the process shifts a bit, so Inland decided on the common capability target of 1.33, or 99.9937% within spec (or for the Six Sigma world, approximately 5.33 "sigma"). Larger capability numbers indicate better ability to meet the specification. If you have a Cpk of 1.33, your average cleanliness can shift by one standard deviation and you will still make at least 99.73% of your product within specification. By changing how you calculate the standard deviation and replacing the C with a P (for performance), you can assess the process as it has been performing without making assumptions about control or distributional shape. The trade-off is that you can only see where you have been and you may not be accurately predicting the future capability. However, it has been our experience that the traditional "C" type capability indices have limited, if any, application in real-world manufacturing environments.

We determined the potential capability of each lubricant stratified (separated) by lubricant and anneal furnace type. The results are summarized in Table 1. Ppk is the potential capability of the designated furnace type to make steel cleaner than the upper spec limit given the two furnace practices and the lubricant, and should be 1.33 or more for this study. Ppm is the capability to hit target; the bigger the number, the cleaner the steel (closer to the target "0" for cleanliness for both the average and variability). Pp (stream) is what the capability could be if it was on target and the two different furnace types were made to give you the same average, perhaps through process improvements or furnace practice tuning. Cp is the capability you could achieve by eliminating out-of-control points in addition to eliminating differences between furnace types and getting the average on target.

From the PPA analysis, we see that for the HNx furnaces, Vendor 1 and 2 nearly meet the 1.33 requirement, while Vendor 3 is minimally capable. However, if we look at the capability for the new furnaces, almost all the suppliers exhibit lower capability, with Vendors 1 and 2 being minimally capable. The one exception is Vendor 2, which actually shows improved cleanliness in the H2 furnaces. Of particular note is that Vendor 4's first formulation is completely inadequate for the application, and when given a chance to reformulate, improves its HNx capability to borderline while essentially guaranteeing that most coils annealed in the H2 furnace will fall outside the cleanliness specification.

An interesting side note is that going into the trial, Vendor 4 was the favorite, both because of price and perceived quality. Vendor 4's product performed well on the other measures of interest, and had the cleanliness not been tested, would likely have been chosen as the new supplier, resulting in increasing customer complaints and returns for nonconformities related to cleanliness. Inland estimated that had Vendor 4 been chosen, $70 million annually would have been lost due to the direct cost of decreased surface cleanliness and its effects. No estimate was made of less direct costs such as rework, missed deliveries, loss of customer confidence (and probably business), customer shutdowns, or scrambling to find a new lubricant supplier in the middle of a cleanliness excursion.

Vendor 2 had the highest cleanliness but did not become the supplier. Vendor 1 was chosen based on a cost-analysis, since its product was significantly less expensive than Vendor 2 and the volume through the hydrogen furnaces was small. Process controls were implemented to prevent steel rolled on the mill with the new lubricant from annealing in the H2 furnaces until ongoing process work had been shown to improve cleanliness in that process. <<