The Decline of Ethical Behavior in Business 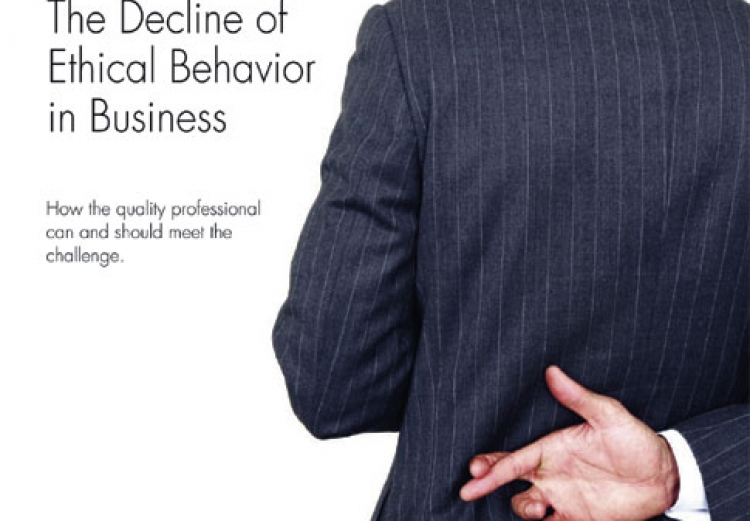 Enron. Worldcom. Tyco. Cendant. Bernie Madoff, once chairman of the NASDAQ, is now cooling his heels in jail. The ex-CEO of Comverse is arrested in Namibia, the CEO at United Healthcare is forced to step down, and Patricia Dunn of Hewlett Packard is charged in an ethics scandal. And, of course, AIG has no problem doling out millions in bonuses to the very people who drove the company and the country into a financial crisis. It seems that no matter where we look today, the erosion of ethics and basic moral principles of right and wrong have taken us to the point where trust in our institutions and the very systems that make our society work are in imminent danger of oblivion. Perhaps at no time during the last two or three decades has business ethics, or the lack thereof, been of such paramount importance to the well-being of our business entities and country.

According to a 2006 Business for Social Responsibility brief, “Corruption and Bribery” ( www.bsr.org/research/issue-briefs.cfm  ), an organization has many reasons for operating ethically, including avoiding fines and litigation, reducing damage to the firm’s reputation, protecting or increasing capital and shareholder value, direct and indirect cost control, creating a competitive advantage, and avoiding internal corruption. On the other hand, unethical behavior in firms results in lower productivity, especially among highly skilled employees, as seen in “The Relationship of Ability and Satisfaction to Job Performance,” by Philip E. Varca and Marsha James-Valutis (Volume 42, No. 3 of Applied Psychology: An International Review ), lower financial performance as measured by metrics such as economic value-added, and market value-added as shown in the 2003 study “Does Business Ethics Pay?” by Simon Webley and Elise More (Institute of Business Ethics, London), and abnormally negative returns to the shareholders for prolonged periods of time. All of these are documented results of unethical business behavior according to “The Wealth Effects of Unethical Business Behavior,” by Michael D. Long and Spuma Rao (Volume 19, No. 2 of Journal of Economics and Finance ).

Worse, as pointed out by Edson Spencer, former chairman of Honeywell, in “The Hidden Costs of Organizational Dishonesty” (Robert B. Cialdini, Petia K. Petrova, and Noah J. Goldstein, in Volume 45, No. 3 of MIT Sloan Management Review), it takes years to build a reputation for integrity that can be lost overnight. Once an organization loses its reputation for integrity, the effect can be permanent, according to the 2004 Josephson Institute report, “The Hidden Costs of Unethical Behavior”  (http://josephsoninstitute.org/pdf/workplace-flier_0604.pdf) . As unethical behaviors are manifested by upper-level management, workers throughout the organization note them, and unethical behavior becomes a cultural norm. Ultimately, this culture results in detrimental behaviors such as underdelivering on promises, turf-guarding, goal-lowering, budget-twisting, fact-hiding, detail-skipping, credit-hogging, and scapegoating, according to studies conducted by the Online Center for Engineering and Science at Case Western Reserve University, cited in the same article.

When unethical behavior is present in a business, it poses a significant risk to that organization. Further, we as quality professionals contend that one of the individuals most at risk from such behaviors is the quality professional. Because we depend on data for our decision making, we are vulnerable to unethical manipulation of these data. For purposes of this brief article, let’s break down these risks into financial data and engineering/process data.

The issues associated with whether we can trust the financial data that we receive are severe, and in fact are likely to get worse. A 2006 study showed that among all graduate students in major universities, MBA students cheat more often than any other graduate students in nonbusiness programs (“Survey Finds Widespread Cheating in MBA Programs,” by Katherine Mangan, appearing in the online edition of The Chronicle of Higher Education ). Earlier studies show that this is not entirely a surprise, because according to the article, this is also the case at the undergraduate level. Consider the 34 MBA students at Duke who were guilty of cheating on a take-home test as one of many examples of what is to come (“Cheating Incident Involving 34 Students at Duke is Business School’s Biggest Ever,” by Jeffrey R. Young, appearing in the May 4, 2007 online edition of The Chronicle of Higher Education ). The business “leaders” of tomorrow are entering our firms “believing that high levels of cheating are commonplace and acceptable,” according to Mangan.

Perhaps you can take solace in assuming that this issue is limited to students coming out of our business schools? Think again. Second only to business majors, students majoring in engineering are the next-worst offenders, as reported by C. Bates in the February 20, 2009 article, “A Student’s View: Why Cheating Matters,” appearing in the online edition of The Chronicle of Higher Education.

A February 1993 study from the American Psychological Assocation, “Sensitizing Undergraduate Students to the Nature, Causes, and Consequences of Research Fraud: Preliminary Report” (Patricia Keith-Spiegel, Howard Lee, Robin Zinn-Monroe, and Gary Brian Spiegel) showed that among students performing research, 41 percent of students indicated that “fudging” data “just a little bit” to support their research was not serious; 5 percent indicated that this was “the sort of thing that just has to be done sometimes in life.” A six-month study of internet “paper mills” conducted by the Chronicle of Higher Education uncovered, among other revelations, a request, ostensibly by a doctoral student in aerospace engineering at MIT, for a 200-page dissertation (“Cheating Goes Global as Essay Mills Multiply,” by Thomas Bartlett, appearing in the online March 20, 2009 edition of The Chronicle of Higher Education ). If these are the engineers and scientists supplying the quality profession with data for control charts, capability analyses, FMEAs, reliability analyses, and the like, then we are in deep trouble.

Arguably, it may even be worse for global firms receiving data from abroad, where, according to UNESCO, corruption in education is growing worldwide. They recently reported on one case in India where universities have attempted to clamp down on cheating, only to have “students protest and demand their ‘traditional right to cheat.’” (“Corruption in Education Is Growing Worldwide, Unesco Reports,” by Aisha Labi, appearing in the June 15, 2007 online edition of The Chronicle of Higher Education ).

As quality professionals, our ability to acquire, utilize, and maintain reliable and valid databases is at risk and will continue to be at risk at least in the near future. Whether out-and-out fraudulent data are provided to us, or whether we are the victims of data-shaving or data-shading, every quality professional is likely to experience this trend at some point in his or her career. In a larger sense, the ethical behavior of a company is certainly part of the “Quality-with-a-big ‘Q’” that we seek to enhance every day. Creating an ethical culture and enforcing ethical behavior is the function of upper management, not just the quality department, but there are some things within our control that we can do to improve the situation. We believe that the implications of this reality suggest that every quality professional should:

• Establish internal systems for the periodic sampling, review, and assessment of critical databases for reliability and validity

• Ensure that among the guidelines provided to external suppliers, ethical expectations associated with the provision be clearly specified and that the consequences of failure to comply with these basic standards be swift, severe, and unambiguous

Telling employees to “do the right thing” just isn’t effective. Ethical dilemmas are not clear choices between breaking the law and being law-abiding; they are at times complex moral mazes with no easy answers. It is not illegal to place the health of the company and investors’ money into risky investments for short-term profits, but a case can be made that it is unethical. The good news is that these moral mazes can be better navigated if employees are trained in ethical decision-making processes and principles.

Here at the Lockheed-Martin Engineering Management Program at the University of Colorado, our postgraduate students are offered just this type of training. The feedback that we receive from working professionals taking this course has been that most in-house ethics training they are offered by their employers is insufficient to deal with ethical dilemmas—it is of the “do the right thing” variety. We think of it as “just don’t” training: just don’t steal, just don’t embezzle, just don’t harass, just don’t discriminate, just do right, etc. Ultimately, this training is simplistic at best, counter-
productive at worst, and always a lost opportunity when one considers what might have been usefully taught instead. In response, we have begun to perform this training at businesses through our Center for Business Performance Improvement. We believe that every quality professional, working perhaps with the human resources professionals in their organizations, should attempt to organize similar seminars. Our center is also working on developing a self- and third-party audit to assess a company’s ethical health, and is actively seeking business partners who are interested in field-testing these instruments.

The time to avoid the results of unethical behavior is before it occurs, not after. As quality professionals, we learned a long time ago that prevention is superior to inspection. In no area might this be more important than business ethics.

These three terms are sometimes used interchangeably when in fact they describe different and fundamentally independent concepts. Clarifying the terms will clarify what type of dilemma you might be facing.

Morals are those values or core beliefs that guide your decisions and are the output of your culture, how you were raised, and your experiences along the way. They are what allow you to determine right from wrong. What is moral and what is not is an internal judgment and varies from person to person, culture to culture, and society to society.

Ethics are standards of behavior within a group or society that indicate how we should behave to achieve the moral goals upon which the society places importance. Ethics are related to how we act and interact with others, and so are external in nature. These vary from society to society, but individuals within the society are expected to maintain these standards. If they do not, there is often a social price to pay.

Laws are the minimum code of conduct to which the group has agreed to adhere. Breaking laws means breaking the social contract to which you agreed in becoming a member of that society. In turn this means that the society has the right to punish you by revoking some or all of the rights granted by that society.

The most difficult ethical problems (i.e., how to act) are when one is faced with a conflict between two or more conflicting morals (i.e., what we see as right and wrong). What may be a moral choice is not always an ethical one, and what may be an ethical choice is not always a moral decision, as seen in figure 1 below. Let’s say that you get test results indicating that your product fails to meet its specification limits. The CEO tells you to pass it anyway. What do you do?

Notice that the law may or may not apply to any of these decisions.